Eva was born at home on October 15th 2010. She was 12 days late and I would have been induced the next day if she hadn't decided to make her appearance on the 15th. The boys were home while I laboured and I must say, I never imagined labouring to the soundtrack of CARS, but it kept the boys so happy they didn't notice their mom groaning next to them on the birth ball. Labour progressed quickly and our midwife, Wendy, came over sometime around 3pm. I moved to our bathtub and at 4:30 pm, Eva slipped from my body into the warm water of the tub and her daddy's waiting hands. Her brothers were there to welcome her almost immediately and she was kissed by so many sweet lips even before we got out of the water. Eva arrived with the fanfare that was to be expected with a first daughter after three sons!

Eva was apparently healthy and obviously happy. We were so thrilled to have a girl! Her three big brothers adored her.

Around 6 months ish I began to be concerned with her lack of weight gain. We went to our family doctor and got a referral to a pediatrician. He saw us at the end of May when she was 7 and a half months old. He told me to increase her iron and to come back in one month.

Two weeks later we were camping when I noticed Eva was grunting as she breathed. I called our doctor who told me to get her into ER. I took her in right away and her oxygen sats were at 82. Very low. She was x-rayed and admitted with a diagnosis of pneumonia because her lungs were wet and this is an indication of pneumonia. It's also an indication of heart failure but nobody was looking for heart failure.

In hospital she  was hooked up to heart monitors and it began to be noticed that she went into a strange and fast rhythm when she was sleeping. On a beautiful Sunday evening in June our little Eva was airlifted to Edmonton's Stollery Children's Hospital. She was admitted to PICU, in isolation, because of the suspected pneumonia and later, it was discovered to just be a cold.

PICU at the Stollery is a whole other world from our small hospital. They took her for x-rays and put her in this clear tube to x-ray her lungs. She screamed and screamed. I slumped on the floor and cried and cried, unable to rescue my daughter. An echo of her heart revealed a deformed heart with a deadly rhythm. We were given a 33% chance of making it out of the hospital with Eva alive.

The doctors tried milranone, esmolol, and a host of other drugs to try and control the deadly rhythm (ventricular tachycardia or VT) that was overtaking her heart. Numerous IVs were attempted on her but her veins were difficult and required numerous pokes to get an IV, which often failed a day or two later. One time an IV was attempted on her scalp. She screamed and screamed and screamed. Eventually they stopped trying because her heart was racing even faster and they were worried they might push her into cardiac arrest.

Many, many things were done to Eva in PICU. And I will never forget the screaming of children in pain there. It was a place removed from time and the rest of the world. A place where children screamed in pain as the adults attempted to save their lives. A place where I began to question the degree of medical intervention we will put our kids through to keep them with us. A place where I put my own daughter through so much, to keep her. 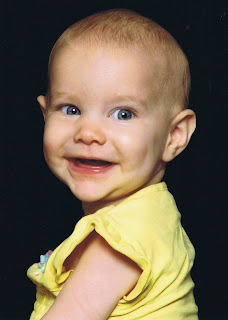 
*I will add to this page as I can...please check back for more of Eva's story.

Em
I am Em, Eva's mama, I am the blessed mother of five children. Four sons on earth who bless me daily and one daughter in heaven who has touched more lives with her brief spark of a life than I will ever know. Until August 15th 2011 I had four children here with me. On her 10 month birthday our sweet Eva went home to heaven. I know one day I will see her again but my heart longs for her in the here and now. One of Eva's gifts to our family is a little brother that would never have existed without Eva's life and death. Our rainbow baby, Nathan Evan, joined us on April 14th 2013.

Thank you Kirsten. Remembering Mira on her first birthday.

Eva in the Truffula tree.